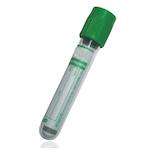 Store frozen prior to shipment

Store frozen prior to shipment. Send to Referral Laboratory ASAP.

Acylcarnitine species are normal intermediates in the metabolism of fatty acids. Generally only small amounts of long chain species (C16, C18:2, C18:1) are present along with acetyl (C2) carnitine and free carnitine (C0). Small amounts of propionyl- (C3) and butyryl-(C4) may also be seen in healthy subjects. When there is a metabolic block in the metabolism of fatty or other organic acids, characteristic acylcarnitine species accumulate in biological fluids. The pattern of acylcarnitines, as determined by tandem mass spectrometry (MS/MS), is often diagnostic. There are some drug intereferences known e.g Pivalic acid, the metabolite of the antibiotic pivampicillin, (it generates pivaloyl carnitine in vivo which has the same mass as isovaleryl carnitine) and Valproic acid (the formation of valproylcarnitine in patients treated with this drug may give false positives for MCADD)

Most disorders of fatty acid beta-oxidation and several organic acidurias can be diagnosed by acylcarnitine analysis, as each enzyme deficiency causes the accumulation of specific acyl-CoAs.

If taken onto blood spot cards, 4 blood spots are required